With this week’s edit of A Prize of Sovereigns out of the way, I’ve resumed working on my short story route to literary fame. I have sent off 23 stories in the last 12 months with an acceptance ratio of 6.23%, according to my Duotrope (https://duotrope.com) control panel.

I’ve been tinkering with the two stories that almost made the grade. One, you will remember, was rejected for having a beginning, and a middle, but no end. The story, Zhuang Zhu’s Dream, deals with a character who starts to have memories of a life that isn’t his. Zhuang Zhu, by the way, was the Chinese sage who woke from a dream in which he had been a butterfly and wondered whether he had been a man dreaming he was a butterfly or was now a butterfly dreaming he was a man. I had ended the story with the main character waking to a terrifying memory of having killed someone. He considers and rejects the ideas of running away, and of confessing to the police. So he simply goes to work as normal. I had been satisfied with the idea. This, after all, is how most of us have to deal with the frightening and the inexplicable. We keep calm and carry on. But the editor was kind enough to give me this feedback.

“I very much liked the style in which this one was written, which was clear and entertaining, with a nice pace and all the elements in balance, and really my only criticism is that I felt it fizzled out a bit at the end. I’m left none the wiser as to what the significance of these false memories might be. The whole story seemed like a lead-up to a denouement that was never reached”

I understand his point. So I tinkered with the ending. It wasn’t easy. I really didn’t want to give any definitive explanation of where the memories came from. Definitive explanations don’t belong in literary fiction, I decided. Perhaps they were just dreams, incorrectly identified as memories? Or perhaps they were something more mysterious? Eventually, I decided on the device of presenting both resolutions, and leaving the reader to reach her own decision, depending on her proclivities. The main character is referred to a neurologist, who tells him that this is perfectly normal, and that he happens to lack a particular fold in his brain which makes it more likely he will confuse reality and imagination. The neurologist enrols him in a research study, where he meets another subject who seems to be living the life he has fragmentary memories of. What’s more, this subject describes having memories of a life that may be that of the main character.

I arrived at this ending having considered various alternatives. Might his memories simply be, as the doctor suggests, part of the normal process of confusing imagination and reality? Might his memories be portents of the future, with the ending being that he kills the neurologist?
I felt up-beat enough about the ending I had written that I submitted the story.

The magazine to which I had sent the first version is currently closed to submissions. So, in a fit of hubris, I submitted to a magazine with a 0.22% acceptance rate. I have already had five rejections from this magazine, so you’d think I would have learned. But belief in my story burned bright enough to take the risk again. I’ll let you know when the sixth rejection slithers into my in-box.

The second story I’ve been tinkering with has proved more complicated. This story, Interstices, was described by the editor as a “polarising story” – some of their readers really liked it and others didn’t. He said, “although everyone recognised it had the kernel of something interesting it ultimately could have been delivered better and with fewer clichés.” What? Me? Clichés? I devoted some time yesterday to hunting for clichés. I really only found one, though I did find some other bits of lazy writing. I showed the story over the weekend to a friend in my writing group. He was on the “don’t like it” side of the marmite polarisation, but he was kind enough to suggest that perhaps the story needed a more dramatic crescendo. I’m still tinkering with crescendos and worrying about where other clichés may be lurking.

Meanwhile, to reassure myself that tinkering is an appropriately adult form of play, I wondered what others might have said about the process. I came across this interesting slide from John Seely Brown (https://usergeneratededucation.files.wordpress.com/2011/12/2011-12-11_1127.png). 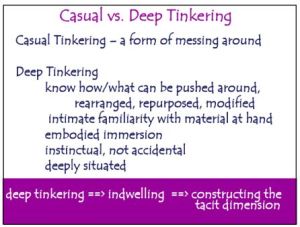 So that’s okay. I’m deep tinkering, not just messing about.