One thing is sure—we’re going to need new stories. Stories help us make sense of the world. And our world now is turned upside down in a way we haven’t seen for generations. How do we go forward from our lockdown societies?

That’s where storytelling comes in. Scenario thinking accepts we can’t predict what’s going to happen. Instead, it looks at the forces that are driving change and constructs several alternative visions of what the future might look like. This allows us to rehearse what we might do in each of these futures. It may also allow us to make better choices now.

So, I built four scenarios of where we might end up. These feature in my book, The Scheherazade Code, about the power of story-telling.

The first step was to identify the drivers of change.

Analysing these drivers allows identification of the key axes of uncertainty about the direction the future might take. 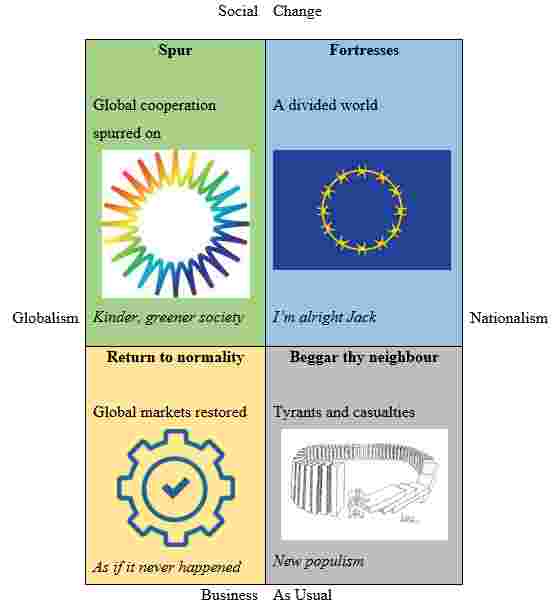 Spur is a world in which the pandemic has prompted a sense of interdependence and cooperation, rebalancing values. The coronavirus response showed that rapid action is possible to decisively face challenges. There’s a renewed focus on the welfare of people and of the planet. Preparation for future pandemics us underway, as are efforts to tackle the climate crisis. Introduction of a universal basic income grant in many developed societies means nobody goes hungry, while international aid is helping to build a more equal world. This is a kinder, greener world.

Fortresses is a divided world. Walls that went up during the pandemic stay up. While there is a greater emphasis on social welfare within national boundaries, fear and distrust remain. There’s little international cooperation beyond that necessary for trade. There are only token attempts at tackling the environment crisis. This is an “I’m alright, Jack” world.

Return to Normality is, as the name suggests, a world in a hurry to return to things as they were. The welfare of capital takes precedence in efforts to get the economy restarted. The free market benefits the rich, leaving the poor behind. This is the world most like the one we left in 2019. It’s as if the pandemic never happened.

Beggar Thy Neighbour is a world based on fear. In an upsurge of new populism, autocratic rulers in many parts of the world have used the pandemic as cover for introducing tighter social control. Dissent is seen as “unpatriotic” and heavily policed. This is a devil take the hindmost world in which most of the benefits accrue to elite.

Of course, the real world may turn out to be a patchwork of all of these tendencies.

Which future will you opt to live in?

6 thoughts on “138. Scenarios for the world after Covid”