A platform is a means for you to reach out to a target audience. In part, it’s the main thing about you as a writer – your published work. In part, it’s your profile on social media – whatever form of it appeals to you, blogging, tweeting, Facebook. Goodreads. I blogged about this in my tenth post, and I decided to take a re-look at what had worked for me on this blog.

When I wrote that first post, the blog had been going a month. It had received 90 views from 30 visitors, and had garnered three followers. Now, a year later, I’ve just passed 1,600 reads, with 588 unique visitors. As you can see, it’s a slow process, and, though slow and steady, the progress is not stratospheric. So it’s a good idea to get started and have your platform in place and growing before you’ve published your first book.

From May 2105 to February 2016, the blog chugged on, bumping along the bottom. On average, every month it attracted around 53 views from 23 visitors. Around three new people followed me every month. Then it all changed in March 2016. Average monthly views went up around seven-fold to 383. Each post is now read by 58 people, instead of the previous nine. Visitor numbers rose over four-fold to 119 a month. And follows more than doubled to eight a month. What was the secret? I joined a network, Friday Fictioneers, built around a challenge to write a 100-word story in response to a photo prompt every week. 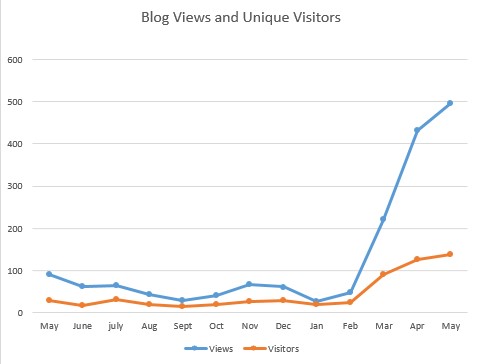 The boost came from two elements: firstly, I was posting stories; and secondly I was connected to a network of around 150 people who write for the challenge every week. So I was buying into an established readership. It’s not magic. Some of the new visitors are reading other blog posts as well as the stories. Views of non-story posts almost doubled from an average of 53 a month to 98. While it does promote my visibility, it certainly doesn’t allow me to post stupid messages like “follow me” or “read my book”.  Though the links are there on my site, only nine new people have clicked through to my publications.

I can’t suggest what will work for you. It will be different for every writer. But the general message is probably

One thought on “70. Developing an author platform”