“Oxfam Sex Scandal”, “Government Crackdown”, celebrities resigning their positions as Oxfam Ambassadors. The facts are getting lost in the hysterical headlines. The Oxfam-gate story about sexual exploitation by aid workers has all the hallmarks of a witch-hunt.

Oxfam is a much-loved household name, one of the largest and most effective and professional international aid agencies in the world. Now it has joined Harvey Weinstein in the sin bin.

The wags say there are six phases to an aid project. 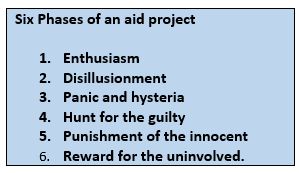 In the space of a week in mid-February, public perception of Oxfam has moved from phase one to phase four. The British government is rapidly moving towards phase five. The story is powerful and gripping. But it’s fundamentally wicked.

Is sexual assault in the aid sector news?

No. It has been widely covered in the media since at least 2015, particularly in The Guardian newspaper. The Humanitarian Women’s Network in 2016 surveyed 1,005 women aid workers in 70 organisations. They reported that 24% of the women had suffered sexual assault at the hands of male colleagues. A rolling survey by Report the Abuse of over 1,000 aid workers found in 2017 that 72% were victims/ survivors of sexual assault.  Only around a third to a half reported the assaults. Only 17% of those who did report were satisfied with the outcome.[1]  So this isn’t news. The witch-hunt is.

On the contrary, Oxfam is an example of good practice. The organisation was singled out for praise in an academic study of the problem by Dyan Mazurana and Phoebe Donnelly.  Oxfam established confidential whistle-blowing procedures and a high-level Safeguarding Unit in 2012, working alongside the internal audit and fraud and corruption teams.

Ex-head of the Unit, Helen Evans, has told Channel 4 News that her team was under-resourced and that Oxfam’s Leadership Team did not take her findings seriously enough. Oxfam head, Mark Goldring has acknowledged that they did not act soon enough to scale up the team.

However, it is undeniable that Oxfam is rare in taking the problem seriously and trying to respond to it. The number of cases dealt with by the organisation’s Safeguarding Unit has more than tripled from 26 in 2014, to 87 in 2016-17. These numbers are still probably just the tip of an iceberg, but the increase is a measure of the success of and trust in Oxfam’s procedures. There is neither logic nor justice to placing an organisation which is trying to respond to the problem is in the eye of this storm.

Is the aid sector particularly bad?

It’s hard to know because there is so little reliable data. On the face of it, it seems unlikely. Sexual assault is about power and thrives in “boys clubs”.  It would be surprising it were not more common in male-dominated sectors like business, the military, academia, the arts, and, of course, government.

What are the facts of the scandal?

We still don’t know.  The media story is that Oxfam’s Haiti country director, Roland van Hauwermeiren, held sex parties with prostitutes in the aftermath of the 2010 earthquake, and was allowed to resign rather than being fired. Other workers are alleged to have had sex with children. Van Hauwermeiren denies sex with prostitutes, but admits he had a sexual relationship with a Haitian woman whose family was being helped by Oxfam.

Oxfam reported the case to the Charity Commission at the time. The Commission claim they were not made aware of the precise details, and only opened a statutory investigation when the story broke in February 2018. It might be said this was a tad incurious of them, given that Helen Evans had complained to the Commission in 2015 about women being coerced into sex in exchange for aid.

It might also be argued that the UK’s Department for International Development (DFID), which provides £32 million of public money to Oxfam, was similarly incurious.

Who carries the can?

Everyone on the periphery of the media feeding frenzy is rushing to distance themselves from any blame.  The Charity Commission and Penny Mordaunt, DFID Secretary of State have been swift to condemn Oxfam.  But there’s plenty of blame to go around. The Charity Commission, suffering cuts like all other public services since 2010, has been under pressure to investigate rogue Muslim charities. Arguably, it didn’t have the resources to also tackle sexual abuse.

The truth is probably that those in authority weren’t that bothered until it became a moral panic.

Why is there a witch-hunt?

All societies are gripped from time to time by moral panics. Remember the satanic video scare and how it played out in the media coverage of the murder of Jamie Bulger? During a moral panic, there must be a simple narrative in which we are under threat by an evil doer. In that sense, the Oxfam story is like a moral panic.

In another sense, something else is at work. The story is very convenient for those who want to see an end to the British international aid budget. There can be little doubt that the scandal will have a negative impact on donations to aid charities and may well embolden the aid deniers. The sound of axes being sharpened echoes down Whitehall and Fleet Street.

Penny Mordaunt, International Development Secretary has only been in post since her predecessor Priti Patel was sacked in November 2017 for breaching the Ministerial code, so she has no record to judge. Unlike Patel, there’s no sign that Mordaunt is anti-development, and indeed can claim some experience of working for charities. But, noting that the public has “nagging but legitimate doubts about aid”, she has threatened to cut aid to countries that do not invest in their own people. This may be bad news for the poorest countries. Her voting record in the House of Commons as logged by the They Work for You website, shows opposition to laws promoting equality and human rights, though she has supported equal gay rights.

“Charity begins at home” is the oft-repeated mantra of those who want to slash aid. In a time of austerity, it’s not hard to see the appeal of the slogan. But those in power know well that aid is not just a moral imperative but supports national self-interest. When the world is richer, there are opportunities for British trade. Conversely, when the world is poorer, failed states proliferate, and war is a great deal more expensive than aid.

What should we conclude?

Did Oxfam fail? Yes, of course, and it may even turn out to be true that it tried to cover-up the scandal. Is there further to go? Yes, much further. In a world where men exercise power over women, and rich people exercise power over poor people, this will continue to happen. All we can do is strengthen recruitment, training, safeguarding and whistle-blowing procedures. The aid sector needs to get better at sharing information about perpetrators so they can’t just move to jobs in other agencies.

But Oxfam has at least tried to put effective procedures in place, unlike many other agencies.  Of course there are bad people who work for aid agencies. There are bad people in government too, and there are bad doctors in the National Health Service. We don’t contemplate shutting down government or the NHS as a result. We expose and punish those who abuse our trust. The vast majority of Oxfam’s thousands of workers around the world are dedicated, conscientious and even, yes, heroic. Millions of poor people around the world will be in a much worse situation if Oxfam’s budget drops. Let’s not buy into stories that invite us to punish the innocent.

[1] Endnote on data: It’s important to say that these were not random samples, but reports by workers who decided to participate in the surveys. So no conclusions can be drawn about how widespread such assaults are. It’s also important to say that the surveys were of “international” staff, expatriates deployed to developing countries. The situation of “national” staff from these countries is largely un-researched. Finally, it’s worth noting that victims/ survivors are not necessarily female and perpetrators are not exclusively male: 89% of survivors were female and 92% of perpetrators were male in the Report the Abuse survey.

2 thoughts on “99. Blaming the innocent – a narrative critique of the Oxfam scandal”